Once you hit the send button on your dashboard, or call our Management API, notifications travel through various servers before they reach devices and before you can get Confirmed Receipts back.

The following graphic will walk you through the details: 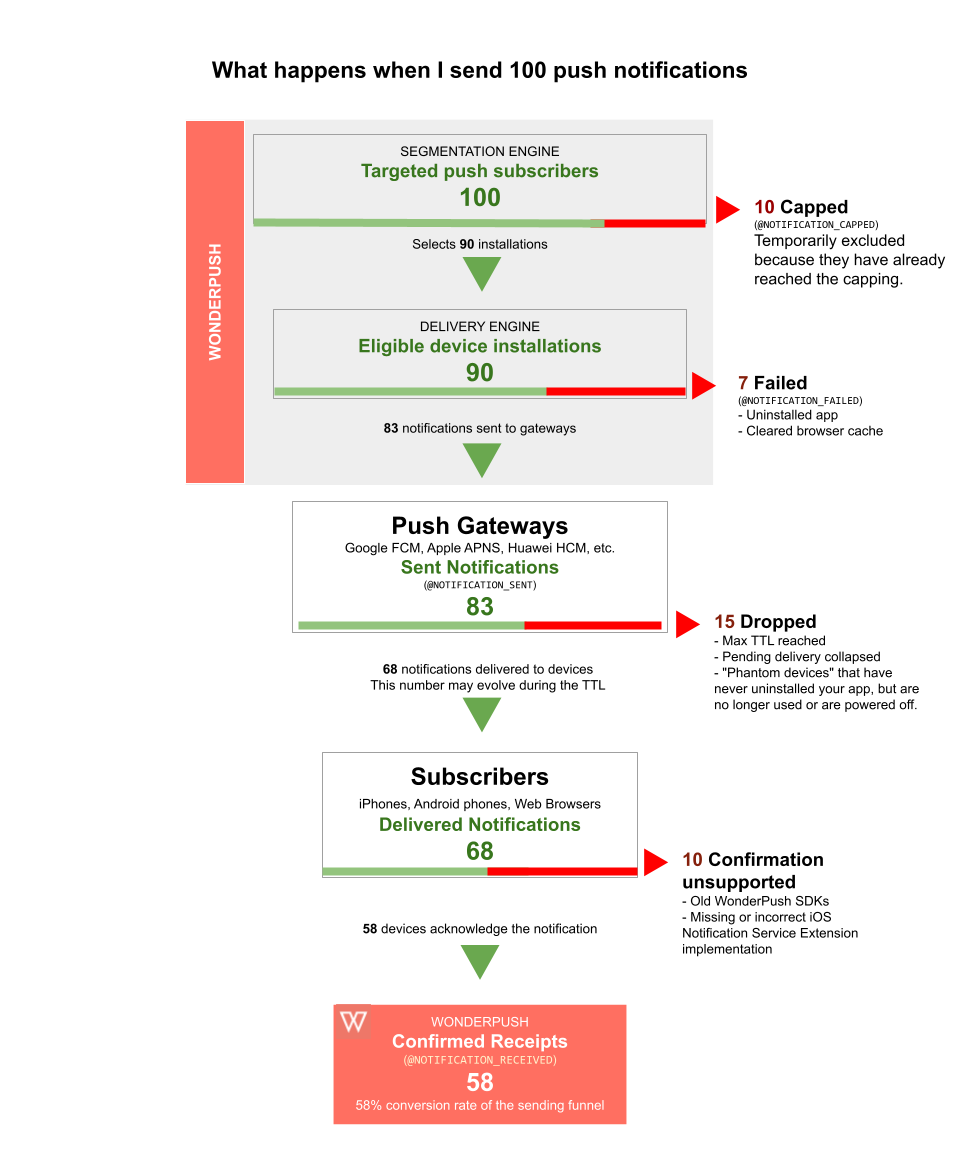 How do Confirmed Receipts work?

When you send a push notification, it is built and formatted on our servers, then sent to the appropriate push gateway servers for delivery. Notifications intended for iOS devices will go through Apple Push Notification service, while those for Android devices and Chrome web browsers will go through Firebase Cloud Messaging servers, etc.

Without device-level confirmation that the notification has been received, WonderPush could only confirm the successful delivery to the Apple or Google servers.

With Confirmed Receipts, devices send an acknowledgment back to WonderPush when the notification is received so you can find out how many have actually received it.

Why are Confirmed Receipts so important?

Confirmed Receipts are essential because they allow a better understanding of the performance of your campaigns and also an accurate calculation of the click-through rate (CTR) over time.

Finally, they make it possible to identify phantom devices, those which somehow no longer receive your notifications without having ever unsubscribed.

Before we had Confirmed Receipts, the click-through rate was calculated by dividing the number of clicked notifications by the total number successfully sent to push gateways of Apple and Google. As your user base grew, so did the number of phantom devices. Overtime you would see an erosion of click-through rate that would seem unexplainable... until we introduced Confirmed Receipts.

With Confirmed Receipts, CTR is calculated by dividing the number of clicked notifications by the total number of confirmed receipts, thus eliminating the side effects of phantom devices. No more unexplainable click-through rate erosion!

Upgrading from a previous version of our SDK?

If you're upgrading from a previous version of the SDK, confirmed receipts will be available as soon as half your subscribers have the SDK v4 installed.

On iOS Apps, you must have the iOS Notification Service Extension setup for the confirmed receipts to be counted.
If you haven't already, read how to add a notification service extension.

How to deal with phantom devices?

Phantom devices are devices which somehow no longer receive your notifications without having ever unsubscribed. They include lost, sold, broken, forgotten or factory reset devices, uninstalled apps, etc.

WonderPush uses a sophisticated algorithm based, among other things, on the repeated lack of acknowledgment to identify them.

They appear (mostly at night) in the "Phantoms" segment.

A good practice before you device to empty that segment is to specifically target it with a final notification and observe the statistics of that last send.

Installations which return a confirmed receipt will automatically be removed from this segment.

You can then empty the segment at your leisure and all its installations will be permanently deleted, no coming back.

There is no standard delivery rate because it depends too much on the nature of the project and its audience. Traditionally, delivery rates on mobile applications are often significantly higher than those observed on websites. This is due to the fact that mobile phones are generally switched on while desktops, which often constitute more than half of web audiences, experience long periods of interruption.

Updated about 1 year ago